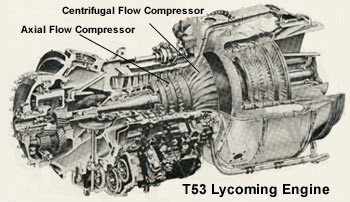 Most of modern passenger and military aircraft are powered by gas turbine engines, which are also called jet engines. There are several types of jet engines, but all jet engines have some parts in common . Aircraft gas turbine engines can be classified according to (1) the type of compressor used and (2) power usage produces by the engine.
Compressor types are as follows:

Centrifugal flow engines are compress the air by accelerating air outward perpendicular to the longitudinal axis of the machine. Centrifugal compressor engines are divided into Single-Stage and Two-Stage compressor. The amount of thrust is limited because the maximum compression ratio.

Adventages and Disadventages
Adventages: Most of the larger turbine engines use this type of compressor because of its ability to handle large volumes of airflow and high pressure ratio.
Disadventages: More susceptable to foreign object damage , Expensive to manufacture , and It is very heavy in comparision to the centrifugal compressor with the same compression ratio.

The turbojet engine : Turbojet engine derives its thrust by highly accelerating a mass of air , all of which goes through the engine. Since a high " jet " velocity is required to obtain an acceptable of thrust, the turbine of turbo jet is designed to extract only enough power from the hot gas stream to drive the compressor and accessories . All of the propulsive force (100% of thrust ) produced by a jet engine derived from exhaust gas.

The turboprop engine : Turboprop engine derives its propulsion by the conversion of the majority of gas stream energy into mechanical power to drive the compressor , accessories , and the propeller load. The shaft on which the turbine is mounted drives the propeller through the propeller reduction gear system . Approximately 90% of thrust comes from propeller and about only 10% comes from exhaust gas.
The turbofan engine : Turbofan engine has a duct enclosed fan mounted at the front of the engine and driven either mechanically at the same speed as the compressor , or by an independent turbine located to the rear of the compressor drive turbine . The fan air can exit seperately from the primary engine air , or it can be ducted back to mix with the primary’s air at the rear . Approximately morethan 75% of thrust comes from fan and less than 25% comes from exhaust gas. 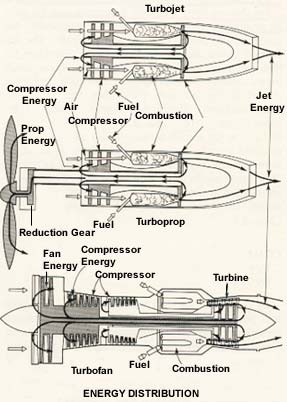 Turboshaft engine derives its propulsion by the conversion of the majority of gas stream energy into mechanical power to drive the compressor , accessories , just like the turboprop engine but The shaft on which the turbine is mounted drives something other than an aircraft propeller such as the rotor of a helicopter through the reduction gearbox . The engine is called turboshaft