What Makes An Airplane Fly GENERALThis is just the basic informations for the beginners which did not know any things about the aircraft or airplane before and wants to know some principles that why the airplane can fly but not in deep details. For the people that want to know more than what I have in here, please go to the text book which have many professors wrote them and the details about the airplane have so much to put it all in the WEB. INTRODUCTIONIt was , of couse, the birds who were responsible for the whole complicated story and business. A man with the brain of a scientist began to think seriouly about attainment of the dream. This was [COLOR=blue]Leonado da Vinci /color, whose detail study of bird flight nevertheless led him to the erroneous conclusion that man’s muscular power, so superior to that of the birds, should enable him to fly in a properly constructed ornithopter,or flapping-wing aircraft.In 1680, Giovanni Alphonso Borelli’s has a result of his detailed study of bird flight, man did not have the power output needed to lift himself and a machine into the air. This brought an end to practically all heavier-than-air experiments until nineteenth century.On October 15, 1783, Jean-Francois had made a flight in a Mongolfier hot-air balloon tethered flight for 4 minutes 24 second. Lessthan two month later a hydrogen-filled balloon had completed a successful two-hours free flight. German [COLOR=blue]Otto Lilienthal/color, whose graceful and beautifully-constructed hang-gliders enable him to become the first man in the world to fly confidently and regularly, total more than 2000 flights.He did not develop control surfaces for his gliders, but rely on body movements to provide limited control in the three axes of pitch, yaw, and roll. He lost his life at age of 48 on 10 August 1896 due to one of his gliders stalled and crashed to the ground. The persons who pioneer of the gliders were Otto Lilienthal (German), Percy Pilcher (England) He also lost his life in a glider clashed three years after Lilienthal, and Octave Chanute (American)(1832-1910) Wilbur (1867-1912) and Orville (1871-1948) Wright, had been interested in the possibility of mechanical flight in the early years. By 1900, they became freinds with Chanute . Chanute encouraged , providing information, and directly assisted the Wrights to achieve their goal of power flight later.First flight they flied the flyer was on 17 December 1903.This is generally accepted as the first man to accomplised the dream.Eventhrough there are some controversy over the first powered aircraft. Alberto Santos-Dumont a little brazilian living in France. During 1906, with his No.14-bis which was power by a 50 horsepower Antoinette engine, he made a first flight of 60 meter at Bagattelle, Paris on 23 October 1906. Some people believed that Santos-Dumont really had made the first power flight in history.NOMENCLATURE or TECHNICAL TERMAlthough we will describe certain terms or parts of airplane more in the next sections as we go along, but we should familier with all of these terms in order to understand the airplane better. 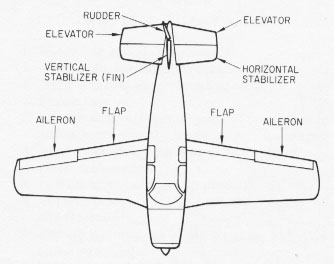 Aerodynamics : Aero is derived from the Greek word meaning AIR, and Dynamics comes from the Greek word meaning Power, or branch of physics which considers bodies in motion and the forces that produce or change such motion. When Aero is combined with Dynamics ,we have Aerodynamics,Meaning " The science relating to the effects produced by air or other gases in motion". Air Currents : are movement of the air with respect to the earth. If the air is rising from the earth , it is called a Vertical CurrentRelative Motion : Motion is a movement.If an object changes it position,it is in motion. Relative Motion defined as an object which has moved or has changed its position with Respect to some other object. An Airplane must have Relative motion between Airplane and the Air in order to fly.The velocity of this motion is called the True AirspeedBernoulli’principle : This principle states that as the air velocity increases, the pressure decreases; and as the velocity decreases, the pressure increases .Airfoil : is technically defined as any surface, such as an airplane aileron, elevator, rudder, or wing, designed to obtain reaction from the air through which it moves.

Angle of Attack : is the acute angle measured between the chord of an airfoil and the relative wind.

Cockpit : is the pilot’s compartment which is seperated from the rest of the cabin.Control Stick or Control Column : A vertical lever or column by mean of which the pilot operates the longitudinal and lateral control surfaces of the airplane. The elevator is operated by fore-and-aft movement of the stick or column, and ailerons are moved by sideways movement of the stick or turn the wheel to left or right.

Aileron : One of a pair of movable control surfaces attached to the trailing edge of each wing tip, the purpose of which is to control the airplane in roll by creating unequal or opposing lifting forces on the opposite sides of the airplane.Elevator : A movable auxiliary airfoil or control surface designed to impress a pitching movement on the airplane, that is, to cause rotation about the lateral axis.Flap : A hinged, pivoted, or sliding airfoil or plate, normally located at the trailing edge of a wing, extended or deflected to increase the lift and/or drag, generally used at takeoff and landing. Rudder : A hinged or movable auxiliary airfoil used to impress a yawing moment on the aircraft. Rudder Pedal : Either one of a pair of cockpit pedals for operating a rudder or other directional control device. The pedals are on the floor and feet operated.Stabilizer : A fixed or adjustable airfoil or vane that provides stability for an aircraft.