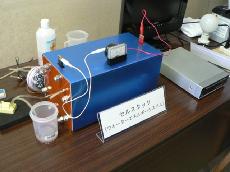 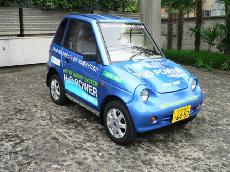 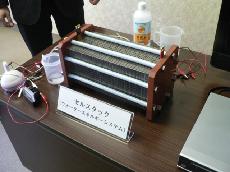 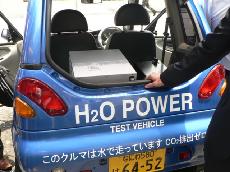 Genepax Co Ltd explained the technologies used in its new fuel cell system “Water Energy System (WES),” which uses water as a fuel and does not emit CO2.
The system can generate power just by supplying water and air to the fuel and air electrodes, respectively, the company said at the press conference, which took place June 12, 2008, at the Osaka Assembly Hall.
The basic power generation mechanism of the new system is similar to that of a normal fuel cell, which uses hydrogen as a fuel. According to Genepax, the main feature of the new system is that it uses the company’s membrane electrode assembly (MEA), which contains a material capable of breaking down water into hydrogen and oxygen through a chemical reaction.
Though the company did not reveal the details, it “succeeded in adopting a well-known process to produce hydrogen from water to the MEA,” said Hirasawa Kiyoshi, the company’s president. This process is allegedly similar to the mechanism that produces hydrogen by a reaction of metal hydride and water. But compared with the existing method, the new process is expected to produce hydrogen from water for longer time, the company said.
With the new process, the cell needs only water and air, eliminating the need for a hydrogen reformer and high-pressure hydrogen tank. Moreover, the MEA requires no special catalysts, and the required amount of rare metals such as platinum is almost the same as that of existing systems, Genepax said.
Unlike the direct methanol fuel cell (DMFC), which uses methanol as a fuel, the new system does not emit CO2. In addition, it is expected to have a longer life because catalyst degradation (poisoning) caused by CO does not occur on the fuel electrode side. As it has only been slightly more than a year since the company completed the prototype, it plans to collect more data on the product life.
At the conference, Genepax unveiled a fuel cell stack with a rated output of 120W and a fuel cell system with a rated output of 300W. In the demonstration, the 120W fuel cell stack was first supplied with water by using a dry-cell battery operated pump. After power was generated, it was operated as a passive system with the pump turned off.
This time, the voltage of the fuel cell stack was 25-30V. Because the stack is composed of 40 cells connected in series, it is expected that the output per cell is 3W or higher, the voltage is about 0.5-0.7V, and the current is about 6-7A. The power density is likely to be not less than 30mW/cm2 because the reaction area of the cell is 10 x 10 cm.
Meanwhile, the 300W fuel cell system is an active system, which supplies water and air with a pump. In the demonstration, Genepax powered the TV and the lighting equipment with a lead-acid battery charged by using the system. In addition, the 300W system was mounted in the luggage room of a compact electric vehicle “Reva” manufactured by Takeoka Mini Car Products Co Ltd, and the vehicle was actually driven by the system.
Genepax initially planned to develop a 500W system, but failed to procure the materials for MEA in time and ended up in making a 300W system.
For the future, the company intends to provide 1kw-class generation systems for use in electric vehicles and houses. Instead of driving electric vehicles with this system alone, the company expects to use it as a generator to charge the secondary battery used in electric vehicles.
Although the production cost is currently about ¥2,000,000 (US$18,522), it can be reduced to ¥500,000 or lower if Genepax succeeds in mass production. The company believes that its fuel cell system can compete with residential solar cell systems if the cost can be reduced to this level.