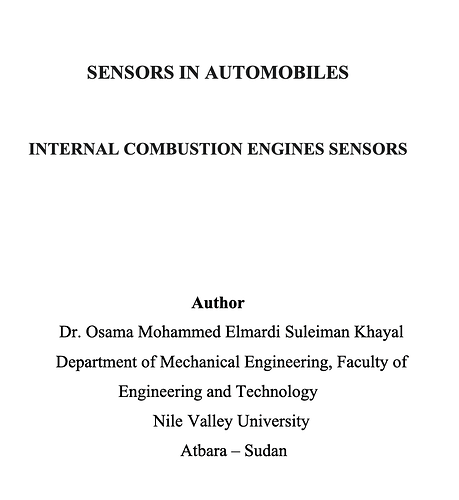 Sensors are essential components of automotive electronic control systems. Sensors are defined as “devices that transform (or transduce) physical quantities such as pressure or acceleration (called measurands) into output signals (usually electrical) that serve as inputs for control systems". It wasn’t that long ago that the primary automotive sensors were discrete devices used to measure oil pressure, fuel level, coolant temperature, etc.

Starting in the late1970s, microprocessor-based automotive engine control modules were phased into satisfy federal emissions regulations .These systems required new sensors such as MAP (manifold absolute pressure), air temperature, and exhaust-gas stoichiometric air-fuel-ratio operating point sensors. The need for sensors is evolving and is progressively growing. For example, in engine control applications, the number of sensors used will increase from approximately ten in1995, to more than thirty in 2010. Automotive engineers are challenged by a multitude of stringent requirements. For example, automotive sensors typically must have combined/total error less than 3% over their entire range of operating temperature and measurands change, including all measurement errors due to nonlinearity.

Engine sensors in a vehicle are incorporated to provide the correct amount of fuel for all operating conditions. A large number of input sensors are monitored by the engine control unit. Today, sensor technology has become common in modern vehicles. Sensors enhance safety of the people - both on board and on road, control vehicle emissions and make vehicles more efficient. In this article, we will discuss different types of engine sensors used in modern vehicles.